Hikers visiting the Pine Cobble trail this season will have encountered a dramatically changed forest canopy. Due to an outbreak of the voracious spongy moth caterpillars, the once-dense leaf cover that continued almost all the way to the top of the mountain has been almost entirely defoliated.

Though spongy moths have popped up in other locations in Williamstown, the Pine Cobble patch has received particularly significant damage due to the community composition: the caterpillar’s number one favorite tree is the oak. According to a 1989 report prepared for WRL, Pine Cobble is home to rare red oak and vulnerable pitch pine forest communities, as well as a more common chestnut oak forest on the lower slopes. Because oak is the caterpillar’s preferred tree species, the leaves on these trees have been completely stripped. It seems as though the caterpillars tend to prefer the red oak, as the trees in the area where they are most prevalent have fared worse.

Chris Buelow, Senior Restoration Ecologist, and Fletcher Clark, Habitat Biologist, of the Massachusetts Division of Fisheries & Wildlife (Mass Wildlife) believe that this is the first year of widespread attacks by spongy moths on Pine Cobble. In the section affected by wildfire in 2021, Buelow and Clark noted that the caterpillars were not as prevalent during the early stage of their invasion. A hike on June 28th this year revealed that they had made their way into the trees in the burned area. As of right now, there is little-to-no research on the relationship between the strength of Lymantria dispar outbreaks and prescribed burn areas. Maintaining forest health is essential in ensuring a good outcome after a severe defoliation event, and controlled burns are one tool that can help do that. Their positive impact on the vigor of oak species may lead to better chances of survival, however an invasion directly after a burn can mean that the trees may not have had enough time to recover.

The spongy moth (Lymantria dispar), formerly known as the gypsy moth (formally changed in 2022 by the Entomological Society of America), is so-named due to its spongy-looking egg deposits. The flightless female adult moths scrape little hairs from their underbelly leaving buff-colored masses on the sides of trees. They then deposit their eggs into these masses, which protect the brood through the winter until it hatches in May. Once caterpillars hatch, they make their way up the trunk of the tree into the foliage and begin to eat.

This species was introduced to North America in the 19th century by Leopold Trouvelot, who wanted to breed them for their silk. Theysoon escaped his yard and made their way across the continent. While similar to the eastern tent caterpillar, they can be distinguished by their markings. The spongy moth caterpillar is hairy, and has 5 rows of bumps running down its body, with the first few being dark blue, and the rest being orangy-red. The eastern tent caterpillar, on the other hand, while similarly hairy, has a bright yellow stripe running down its body.

Over the course of their life cycle, these caterpillars can wreak havoc on their host trees by systematically consuming leaf after leaf, leaving only the central midrib and a few veins still attached to the petiole. The species mostly prefers oaks, although visitors to Pine Cobble will confirm that they leave no hardwood tree untouched. The American beech trees prevalent along the rocky area that begins at about 1600ft of elevation have been similarly consumed. These caterpillars first attacked the Eastern cottonwood at Mountain Meadows in Pownal, VT.

Currently, population management remains cost-prohibitive on a large-scale. There has been some success for managing outbreaks using a virus that specifically targets the spongy moth, which is being researched for its potential to slow the spread. Research is being done by the National Forest Service to find new, highly potent viral strains to use in biological control, but this method is still costly. A naturally occurring fungus, Entomophaga maimaiga, has also been shown to significantly reduce outbreaks, but it requires very wet spring weather to be able to damage spongy moth populations.

While the immediate impulse might be to search for methods of control, these outbreaks may actually have some benefit to the long-term health of the forest. Although some trees may die without the ability to photosynthesize during the most productive months of the summer, the healthiest trees will be able to produce a second flush of leaves to finish the summer off strong. By putting pressure on the weakest trees, these outbreaks ensure that only the healthiest trees survive .

The gaps in the forest canopy left by the death of weaker trees also presents a rare opportunity for trees of other species that would not normally be able to compete with the dominant species to gather sunlight and diversify the forest, leading to a forest more resistant to disease and other pressures.

Although there are some benefits, repeated years of mass defoliation can lead to large-scale tree death. Most deaths occur one to three years after an invasion, as weakened trees become vulnerable to funguses and insect invasions. These secondary threats also increase if additional stresses occur within that time, such as drought, so it will be important to monitor forest health in the coming years.

As the caterpillars begin to pupate and moths go into their mating season through July and August, be on the lookout for their fuzzy egg deposits. While scraping them off trees will not entirely eradicate them, it may lessen the burden next year and give the trees enough energy to survive until the outbreak dies down. Keep an eye out too for the second flush of leaves that’s just beginning now. To learn more about the moth and what you can do to protect individual trees, visit the mass.gov website and search for the spongy moth. 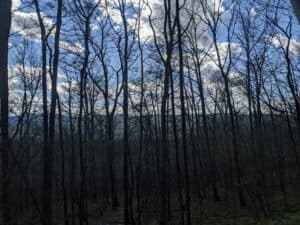