On Wednesday this week we found our first baby wood frogs of the year at Sheep Hill. 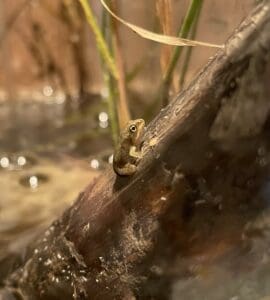 The kids in our second session Nature Discovery Program discovered them in the very cool pond habitat the kids in our first session had set up. “We found the first one sitting on the wood bridge in the tank,” Eli shared.

“There were five today. We set them all free so they could eat,” shared Landon. Rory chimed in: “We put them on the side of the pond.”

Dash confirmed the frogs’ identity: “We knew it was a wood frog because we have a book about [them], and it looked distinctly similar to the ones in the illustrations.”

The parent frogs arrived to Josiah’s pond the very same day as our new executive director. “The sounds of the frogs calling that day, that entire week, served as a welcoming chorus for me,” recalls Executive Director Robin Sears. “I consider our joint arrival as a good omen, definitely.”

Male frogs arrived on March 29, calling vigorously, day and night. The females arrived a day or so after and began to lay mass after mass after mass of eggs. “I remember I interviewed here that week,” Williams Outing Club summer trail steward intern Zeb recalls. “It was quite stunning, the number of egg masses.”

The eggs matured for a few weeks, and one day, the pollywogs, otherwise known as tadpoles, started to appear. “It was crazy, the density of polywogs,” Robin exclaims. Williams College biology students came several times to in April and May to collect the little swimmers for a genetic study of the wood frog populations at Sheep Hill and Hopkins forest. “They have beautiful gold in their underbellies,” pointed out one Biology student. Another reported during our Firefly Hike that the Sheep Hill population seems to be more genetically diverse than the other. Yay for us.

“Wood frogs get their name from living in the woods,” explained Dash. “They come to the pond for only a short time; otherwise, they spend their time hopping around the woods.”